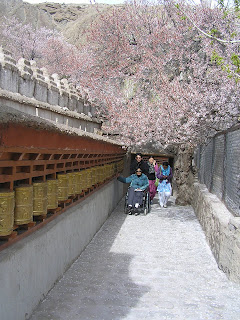 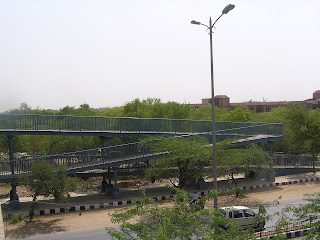 In the flurry of preparing Delhi for the upcoming Commonwealth Games, Delhi has been revamped. There is the new BRT Corridor, the low floor buses, huge overhead bridges, accessible pathways and the swanky metro. All of these have accessibility incorporated in them. I should feel fortunate being a wheelchair user that now public transport and the pedestrian environments is accessible to me. But the unfortunate reality is that none of these so called accessible facilities are really accessible to the disabled and hence have not brought the desired mobility. Money is being spent in the name of accessibility but what we have really got are ‘teasers’. ‘Teasers’ being my way of describing facilities that are signposted as being accessible but are not usable by disabled people in reality.

Usability is the first and the basic requirement of accessibility and it is here that all these fail. Usability goes beyond blindly putting on ground accessibility standards, it is about how a user will actually interface with the given service/facility/infrastructure etc. it may also vary based on the social context, therefore what may be a working design in a developed country may not be so in a developing country. To increase usability is also the crux of Universal Design.

Just yesterday I went out on my wheelchair and thought of crossing to the other side from the overhead foot bridges that have been built all over Delhi. The bridge is about seven meters high with a ramp 89 meters long of 1:12 gradient to get onto the bridge and the same ramp on the opposite side.

In India most people will say “arre there is a ramp na to get on and off the bridge and that to of 1:12 gradient, then what more do you want?” What they fail to see is that a wheelchair user will need to wheel two hundred meters, that too up and down a ramp to cross just a 10 meter wide road. So its 10 meters verses 200 meters.


I am sure even athletes using wheelchairs will find negotiating this ramp difficult!

Here I will also like to point out that accessible parking is demanded & provided closest to the entrance to ensure that disabled car drivers and passengers do not need to walk extra, but when it comes to pedestrian environments adding 200 meters to the journey is reasonable. Why this disparity?

A resent press release by the Delhi metro said that there ‘Delhi Metro provides wheel chair facility to old and physically challenged commuters at all Metro stations. On an average, 149 physically challenged people and 78 blind commuters use the Metro system daily’ and ‘On an average, it is carrying about 800,000 commuters everyday.’ Just taking the figures published by them it is easy to calculate that there are only 0.02% people with disabilities who use this so called ‘accessible transport system’ to travel.

The pavements in Delhi are been refurbished and most with tactile guidance and ramps at the beginning and end. The amazing part is that the guidance breaks whenever there is an obstacle in the path like trees, poles etc., hence ensuring people with blindness bang into them and majority of the ramps are blocked by bollards, through which a wheelchair cannot pass.

I wonder when will people with disabilities stop compromising and accepting shoddy solutions to improve access. The UNCRPD talks about ‘Persons with disabilities to have access, on an equal basis with others’ its time we demanded it.
at June 14, 2010 No comments:
Email ThisBlogThis!Share to TwitterShare to FacebookShare to Pinterest
Labels: accessible pedestrian environment, Civil Aviation; Disabled; Air travel; ambulift; airline; Go Air; IndoGo; SpiceJet; Jetlite, footbridge, inclusive mobility
Newer Posts Older Posts Home
Subscribe to: Posts (Atom)